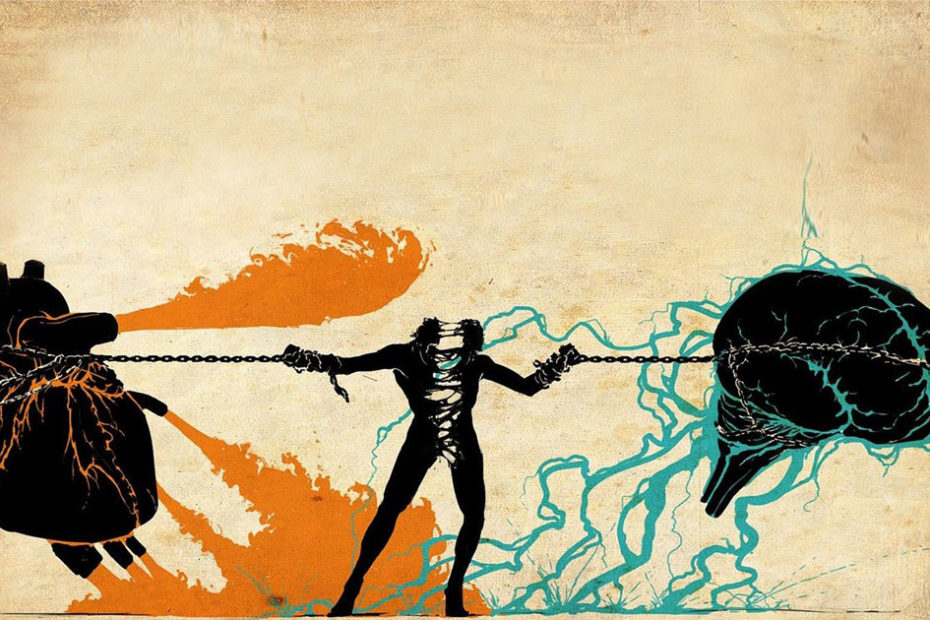 Imagine you’re in a restaurant, reading the menu and trying to decide what you’re gonna eat when magically, all of a sudden, you loose all your emotions and become a purely rational person. You become incapable of feeling fear, sadness, happiness, of suffering or feeling pleasure. You still have your senses, but even if you eat and feel a good taste, it won’t please you anymore. It won’t really feel good anymore. Actually, the word “good” will loose its meaning in your new universe, once nothing brings pleasure. If something touches you, you notice it, but there is no feeling of pleasure or pain. Even if you get hurt and feel what you used to call “pain”, it won’t bother you anymore. Under these conditions, what do you think you’d do?

It took me a while to draft an answer to this questioning. Even after giving it some thought, I can only say I have a partial idea. But I’m quite convinced that there’s a lot of truth in it. Basically I think I would stay there, sitting at the table, staring into infinity, with no motivation to do anything whatsoever. I wouldn’t react to people trying to communicate with me and at one point I’d probably be taken to a hospital, where they’d feed me through tubes because I wouldn’t eat what was offered to me. None of these things would disturb me and I would just be apathetic forever until the day I’d die.

There are those, of course, who don’t fully agree, and I concede some of them have good points. One is that most of us animals develop certain automatic behaviors and they don’t exactly require intention. It might be more precise, therefore, if I say I wouldn’t take any conscious action. I still think it’s plausible that I wouldn’t do anything at all, but I’m even more certain that I wouldn’t take any conscious, intentional decision. After all, when it comes to what motivates a person, it always boils down to emotions in a way or another. No matter how distant that original emotion may be from the final outcome. Some may say that “sometimes we make rational decisions, ignoring our emotional desire to do otherwise”. But if we think about it, it’s simply a matter of preference. When you study something tiring instead of playing a video-game, for example, you do it because you don’t want to fail your course, you want to have better academic results, better job opportunities, better reputation, or simply benefit from the knowledge you will acquire from your studies in a personal way. But whatever the reason is, for you it’s worth it. It brings a gain. A gain that, according to your preferences, is greater than the momentary pleasure of playing video-games. This is called “delayed gratification“. If you gave in to temptation and went for immediate pleasures all the time, this would have very bad consequences for your life in the long run. And once we reach a certain age, most of us are aware of it.

That being said, it seems clear to me that reason is nothing but a tool used by us to achieve goals that are ultimately emotional. No matter how much you calculate rationally what you should do, you will always be actually calculating “what you should do in order to gain the most satisfaction”, and satisfaction is always something subjective and emotional.

It’s hard to feel certain about whether I’d exhibit unconscious behavior though. Would I bite my nails, for example? Supposing this is an automatic habit (as it pretty much is, in my case), then maybe. But how unconscious is this act? I usually only bite my nails if I’m distracted, because consciously I wouldn’t like to, I guess. Would I ever be “distracted” if I had no emotions? Would I think about anything at all? Besides, many of these obsessive behaviors are often related to anxiety, nervousness etc. Well, this inquiry raises many questions. Diving deeply into any of them would change the main point of the text. As I don’t have conclusive arguments, I’ll leave them open to further reflection.

If there’s one thing I should conclude from thought experiment with a good level of certainty is that however great a tool reason may be, it only makes sense to think of this word as this: a tool. And as a tool, it plays no role in motivation. I am an enthusiastic rationalist, but just because I strongly believe that reason is the greatest tool we have to examine ourselves, our society, and plan measures to achieve the greatest possible gratification.