Slaves to the DNA? 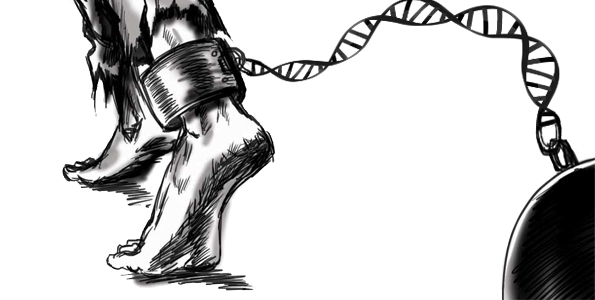 Since its discovery in the early 20th century, the DNA has become a huge center of attention in biology. It has sparked new interest in the field of genetics, become basic knowledge for the more recent generations, a target of media coverage and even a common element of popular culture. But what do we really know about the DNA? Is our high-school curriculum up-to-date with current research and are educators aware of the implications this sensitive field of knowledge has on how we understand and deal with human differences?

I am not a specialist and most of what I’ll write here is a superficial, high level summary of Prof. Sapolsky’s course on human behavioral biology (available online as part of Stanford University’s online learning initiative), which is in turn also a rather high level summary, considering it’s an open course for undergraduates of all areas with no pre-requisites. If any biologist happens to read this text and notice some inaccuracy, feel welcome to let me know in the comments.

It is common for us to see the DNA as a cake recipe. The recipe is read, the cake is made, done. It is an analogy that often appears in laymen accounts of genetics. But I will argue that it is a terrible and extremely misleading analogy.

The analogy is terrible because, first of all, we are not like cakes (or any sort of food for that matter). Really, a cake being made and then spoiling and decomposing after a while may be analogous to a person being born, getting old and dying, but it’s as analogous to a baby being born dead and decomposing in a casket in some cemetery. Life is more than that. We are born, we grow, we change, we learn, we communicate, we change the environment around us, we reproduce, we have an impact in society. However diluted it may be, each of us makes a small contribution and then we die, living a part of us behind in the form of slightly different, and hopefully better world. The cake doesn’t do anything. It doesn’t interact with the environment in such a significant way.

Thus, if the DNA is a recipe, it’s not a recipe for food, but for some very complex system that interacts with the environment. Like a machine has buttons that change its state, we also have sensors that respond to changes in the environment and generate physiological responses. This involves the sensory system (e.g. eyes, ears, etc), the brain, and the part of the nervous system responsible for the communication between the two. All parts of our body that are coded by the DNA.

For some reason, however, probably because this knowledge is very recent and it takes long to adapt our cultural baggage, although people are very eager to accept that the color of their eyes is determined genetically, they’re very reluctant to admit that their personality traits also have roots in their DNA. This is no surprise when it comes to religious people, of course, but it’s puzzling when it comes from the non-religious. If the DNA codes for our brains, how could it not influence our behavior?

A very illustrative case is that of Phineas Gage, who after surviving an accident that damaged his frontal lobe became a rude, impulsive, irresponsible man. Now the frontal lobe is known to have an important role in controlling impulse and leaving some decisions for the conscious reasoning part of the brain to take care of. And I don’t want to get repetitive but the frontal lobe, just like any other part of the brain or the body for that matter, is coded for, at least in it’s initial, most pure and unaffected version, by the DNA. So recipe is really a bad word. After all nobody refers to the instructions used to make a computer or a spaceship as “recipe”.

Secondly, the analogy is misleading because once the cake is baked, the recipe can be thrown away and the cake is still there, fresh, good, serving its purposes, “alive and well”. A much better analogy would be the rules of a complex board-game or a computer program. And I don’t mean the paper with the instructions or the file with the program. I mean the information. If you’re playing a game and you lose the information about the rules (e.g. you forgot them and lost the manual), the game stops. It can’t go on. It is the same with the DNA. It doesn’t just determine the color of our eyes, how curly your hair will be, etc. It is a set of instructions that is always running. Taking input and generating output.

“DNA is like a computer program but far, far more advanced than any software ever created.”
― Bill Gates, The Road Ahead

We learn in school that the DNA defines how we are to be formed. That certain genes determine the color of our eyes, if we are gonna have albinism, anemia, etc. The impression we have is the DNA is only “used” when our body has to be built, and that once the oven beeps and the baking is done, the recipe can go back to the drawer, only to be used again next time we need to cook a new cake. This is not the case. Unlike recipes, the DNA has “if/then” clauses, just like a game (if the result of the dice throw is X, do Y). 98% of the human DNA is noncoding[ref]Elgar G, Vavouri T (July 2008). “Tuning in to the signals: noncoding sequence conservation in vertebrate genomes”.[/ref] (i.e., they code no proteins). At one point the purpose of these stretches of of DNA was unknown. They were even called “junk DNA” in the non-specialized media. Now it is known that one of its main purposes is to function as “if/then” clauses.

Gene expression is the process in which a gene is read and its information is used in the synthesis of a genetic product. If it’s hot, for example, your cells “notice” it and release a chemical called heat-shock protein 90 (Hsp90 for short) that “activates” regions of the DNA that produce the necessary molecules to deal with the intense heat[ref]How environmental effects regulate genes – ETH News[/ref]. This is an instance of what’s called a gene-environment interaction. In technical terms, the protein triggers the transcription of the appropriate genes that in turn produce the necessary products. Let’s say M is one of these produced molecules. The stretch of DNA that codes for M may be perfect. But if the promoter region of the gene has a bad mutation, the transcription will not be triggered when it should, and this could have severe consequences. This is a very new area of biology and rather hard to access for non-specialists. But it has been speculated, for example, that some variations of 5-HTTLPR, the promoter region of SLC6A4, the gene that codes for the serotonin-transporter, may be linked to neuropsychiatric issues such as depression and bipolar disorder[ref]Neuropsychiatric disorders section on Wikipedia article on 5-HTTLPR (with references)[/ref]. Only time will tell us with more confidence how these mechanisms work, but one thing is already quite clear by now: genes and environment are constantly interacting.

This mechanism in which an external stimulus triggers a chain of events that leads to the transcription of a gene is a particular case of a more generic phenomenon called signal transduction. We are basically machines with sensors that form an interface between the external environment and the body, sending data to our internal code that, in function of this input, returns an output or another. We are a living communication network. From the level of macroscopic sensory structures in our bodies down to the microscopic level of the DNA. As the system gets more complex and the chain of events longer, it’s harder to see the connection between the input and output. But it doesn’t mean there isn’t one.

Many tend to think of palpable, physical properties of our organism as fundamentally different from mental, behavioral ones. For them, although it’s accepted that the former is basically biochemistry, it’s almost as if the origin of our thoughts and passions are above matter and biology. This is no surprise if we’re talking about religious people. But they’re not the only ones to espouse these views. Many non-religious people display this cartesian, dualistic thinking. But this is a mere vestige of our cultural history. There is no basis for it in contemporary science. There are genes associated to risk behavior[ref]The thrill-seeker’s gene links junkies and bungee jumpers – The Observer[/ref], monogamy vs. polygamy in prairie voles[ref]Gene switches make prairie voles fall in love; Epigenetic changes affect neurotransmitters that lead to pair-bond formation – Nature[/ref] and even humans[ref]Monogamy gene found in people – New Scientist[/ref]. The DNA is not a simple script that generates a predefined output on demand. It is a complex background process constantly interacting with the environment.

Another misleading impression we tend to keep from our high-school biology classes is that natural selection always acts on the level of the individual. This is not true. As Richard Dawkins argues in his 1976 book The Selfish Gene, sometimes described as revolutionary[ref]Richard Dawkins: How a Scientist Changed the Way We Think – Grafen & Ridley, p. 72[/ref], natural selection acts on a much smaller scale: that of the individual genes. A gene that predisposes an animal to sacrifice its life for that of 5 siblings, for example, has a high chance of being selected for, since it increases its own survival as a gene (in the siblings), even though it may be fatal for the less fortunate individual. This opens a whole new world of intra-individual gene competition.

While on one hand being empathetic, for example, may be advantageous when it comes to protecting the kin, violence and coldness are also valuable when it comes to self defense and defeating the competition. We are the battlefield of a constant war between contradictory feelings and impulses, each a signal in this complex communication network, and only the external conditions can determine who is gonna win at any particular time.

As animals evolve, they alter the environment around them, creating complex structures such as ant colonies and beehives. These structures, in turn, exert evolutionary pressures on the very creatures it owes its existence to. It is one of nature’s feedback loops. Claiming one controls the other is like claiming to have found who came first, the chicken or the egg. The more complex an organism grows, the more sensitive it becomes to small changes in its environment. And if an organism becomes capable of adapting to these changes on the go, in its own lifetime, then it has clear chances of leaving more offspring than its unadaptive competition, rigidly programmed to act in a limited set of ways even in face of an ever changing environment. As a product of human organisms acting collectively, society may be slave to our DNA, but as a part of our environment, as a powerful entity determining when each of our genes should be transcribed or not, it is also its authoritative master.